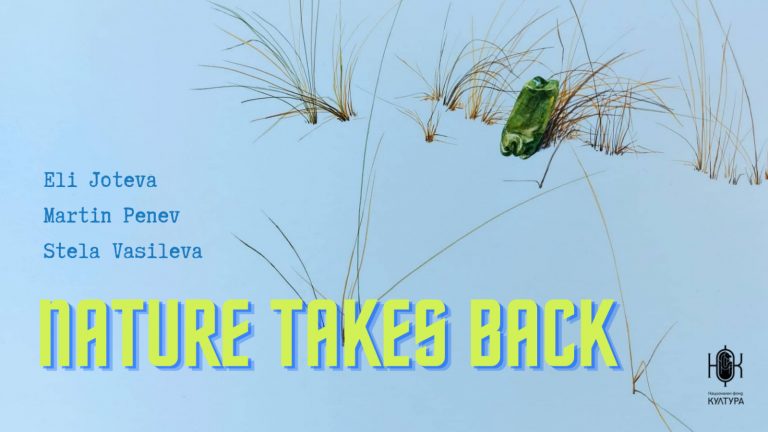 
Dolphins swim in the waters of Venice, the air gets lighter, purified from unwanted harmful emissions, wild animals roam freely the city streets…?

Did get to fully experience the startling phenomenon, which clearly demonstrated how, in our absence, nature blossoms and takes over the marks of civilization? Have we managed to get closer to eternal wisdom, the transience of humanity, the helplessness, the fragility? Have we become more creative and kinder? Will we return to nature, beyond our ego? And does nature even need us?

Through the works of Eli Joteva, Martin Penev and Stela Vasileva, the exhibition presents psychological portraits of the human species in its communication with nature, it traces the endangered balance between the concern for our own existence and the protection of our environment.

Aspects of reality caused by Covid-19 and the sudden isolation we experienced. Social, moral and environmental lessons of an extraordinary time.

> Eli Joteva (b. 1990) (www.joteva.com) is an intermedia artist and researcher based in LA. Her practice is influenced by quantum mechanics, neurophysics and machine vision and aims to shed light on the invisible forces that influence us.  Using various photographic, digital and sculptural mediums to amplify the intangible, her work often aims to extrapolate the ephemeral realms of human memory and perception. She holds an MFA from UCLA Design | Media Arts, a BA in Fine Arts from USC Roski and completed The New Normal postgraduate research program at Strelka Institute for Media, Architecture and Design. She has exhibited internationally in venues like Ars Electronica, Fischer Museum, Rijksmuseum Twenthe, Photon Gallery, SciArt Initiative, DC I/O, Culture Hub LA, FakeMeHard, Gogbot, Currents New Media, xCoax, DA Fest, Sariev Contemporary and Queensland Center for Photography. She has been a resident artist at STEAM Imaging III with Fraunhofer MEVIS, Vermont Studio Center, ACRE, Photo+Sphere and an active member of UCLA Art Sci Center | Lab. She is currently a professor at houdini.school, VR Gallery Director and Curator at SUPERCOLLIDER and Co-founder of current.cam.

~ Her project for the exhibition “Nature Takes Back” is related to the memory of nature, which emerges both organically and through digital methods and platforms. Landscape portraits that come to life in the phones / tablets of the viewers and reveal their memories.

„ In my practice as an artist I have been involved in various genres – performing arts, dance, media arts, object, installation. Regardless of the genre, a tendency to work with archetypes, with unconsciousness, gradually became apparent. I imagine my ideal piece as sobering game for adults.” – Martin Penev (Open Art Files: openartfiles.bg/en/people/914-martin-penev)

~ As part of the “Nature Takes Back” exhibition he presents his project “Unstable Structures” – kinetic installations illustrating the grotesque dance of human ambitions and ego with the small representatives of the animal world. In a time of new pandemics, we are once again proving that even an ambitious human body is as fragile as the rest of the living bodies on the planet.”

> Stela Vasileva (b.1983) (stelavasileva.com) lives and works in Sofia. She graduated from the National Academy of Fine Arts in Sofia with a major in Mural Painting. She works in the area of the object, the installation and the drawing. She explores the form, the objects in space, with the main attempt to unload the objects of any superfluous elements, while also putting it out of the context of its concrete (ordinary) environment. In doing so, she often erases the boundaries of real space.

~ Her project for the exhibition “Nature Takes Back” includes a series of watercolor drawings of garbage fused with nature. “The perverse fusion between the natural and the human in a degrading and unproductive way – reached its peak today. When an unexpected isolation caused by Covid-19 showed us that there is another way” – Stela Vasileva.