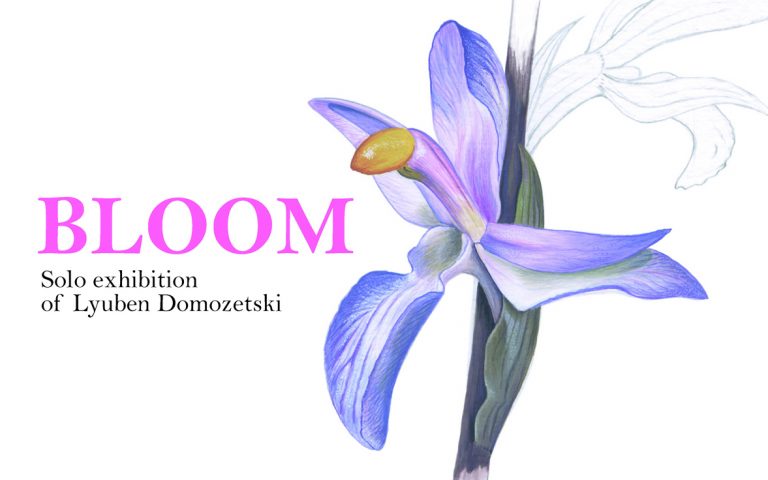 You can see artworks from the exhibition here!

Bloom exhibition follows, in a way, that same thread of semantics and genre characteristics seen in Lyuben Domozetski’s debut solo exhibition: this is the scientific illustration and the experiment with it. But it is namely in these experiments, which are the centre of the exhibition, that something new seems to be sneaking in, something different from the ones last year: this is the human presence. The artist depicts parts of himself including specific real plant species that convey various messages. The main storyline is the relationship between man and nature, a relationship that is inevitable, eternal, secure, and strong, but not always quite conscious. Man is part of nature, man is nature, and nature stems from man. These works demonstrate this principle literally, but the selected elements and human parts also bring about thoughts in other directions. Man has its own nature. Man chooses whether or not, or how much to let it flourish, whether to hide it, to remake it, to control it, or to ennoble it… Balance is hardly ever easy to achieve. Our thoughts, feelings, longings, fears, and hopes push us in one direction or another, sometimes closer to God, and sometimes further away from Him. These works, too, have a little bit of God, a little bit of death, a little bit of lust, a little bit of spring. They express the idea of renewal, of transience, of perishability, and of intimacy. Their technical execution is an effort to follow the traditions of Mediaeval and Renaissance painting: the surface is wood, used for icons, and the medium is egg tempera, again used for icons. Presenting this idea without scientific illustration is unthinkable, they complement each other, one leads to the other, and vice versa. The scientific illustrations are restrained, rigorously following the established norms. This restraint, however, cracks under the occurrence of inexplicable, and rather questionable images that do not seem to have anything in common with the presented biological specimens. This contains some kind of a concealed inner conflict. The exhibition includes older works as well as such that are site-specific and especially conceived for the current project.