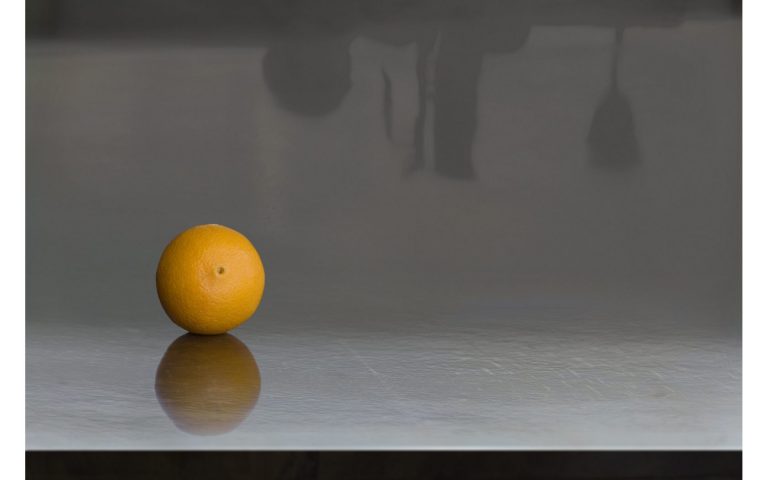 “On the Kitchen Table” is a series of twenty-one photographs, each selected from an average of one hundred, taken over several weeks. From February to May 2020, every day Nadezhda Oleg Lyahova takes hundreds of shots in an attempt to reproduce images that appeared for a second in different states on the same surface. Slow and laborious procedure, in honor of one of the most unpretentious genres in art, still life.


The objects – “living” or “inanimate” nature, together with the reflections, the light and the whole arsenal of sources and means, are working to achieve “La grande bellezza” in art.  This series of photographs speaks of lack of appetite and eye hunger. Dozens of oranges have been used for the scenography and it is clear that someone has played with them instead of eating them. This tendency to arrange  could also be found in other works of the artist. Those, who know her work, will also recognize the theme of transience, pride and vanity. The constant doubt in the meaning of making art and at the same time the obsession with art, the impossibility to live without it and without the constant search for the perfect image – the shared neurosis of the author and the viewer. And in the current exhibition, this story continues. It is a “story” because the title suggests a sequel. As if at some point someone will tell you what’s really going on at this table. And the following of the photographs hints at characters and relationships, emotions, moods, different stages of life. One of the oranges looks “bloomed”, another is “squeezed”, a third one is “sour”.  The atmosphere on the table surface has a different temperature everywhere – it creates the illusion of summer time, water or a metal surface. And the general impression is of a painting. The author is very well aware of her ability to achieve the effects of handicraft techniques with digital tools and she is calmly stepping into the field of oil paints, pastels or graphics. And she does it with the most harmless device possible – it is well known that her camera is never of the highest class. She watches and arranges much more than she takes photos in the technical sense of the word – perhaps this is where the connection between pride and pursuit of perfection lies. Nadezhda Oleg Lyahova’s obsession with painting sometimes goes hand in hand with a seemingly endless mechanical action. And it’s interesting how accumulation and superimposition finally start making sense. “On the kitchen table” the layers are spread in separate frames, but most of them are literally erased from the camera’s memory to remain only what the exhibition is. This exhibition has a strange retrospective character. Although it presents only the latest work of the artist, the references to various stages of her work in the last, perhaps thirty years, are clearly visible. And at the same time, it is completely different from anything done so far.